WHY CHOOSE THE NEWTRON GROUP

We are committed to our customers’ success from start to finish.

The Newtron Group is one of the largest privately-owned Specialty Electrical Construction companies in the United States and is among the nation’s leading Industrial Electrical and Instrumentation providers. We also offer a suite of innovative and customized Analytical, Automation, Heat Trace, Integration and Design solutions for a wide range of industries.

From concept to construction, our team can save you time and money by providing all these services turn-key. We are one of the few providers who can offer your company this kind of comprehensive solution.

With offices across the southeast and west coast, we have performed work across the United States and have established strong partnerships with manufacturers, suppliers and vendors. This enables us to secure the best prices possible and we pass those savings on to our clients. You will not find a more service and quality-oriented partner.

The Newtron Group was built based on our founder’s values. Newton Thomas believes that all employees should be treated with respect and dignity. One way we do this is through annual events hosted by our regional offices, recognizing employees for their length of continuous service to the company. Long-term committed employees are one of our greatest strengths, and plaques are given to those celebrating their 5, 10, 15 … 45 years of service.

In September 2012 at the Martinez, California, regional office event, an employee receiving a plaque approached President Bruce Beard. He shared that he was a United States Marine Corps veteran and that the Marine Corps had a motto “Semper Fidelis” that is always in the heart of a Marine. It means “Always faithful” and is with them at all times. He had a similar feeling about working for the company and thought that we should develop something like Semper Fidelis.

Our creed, “LiveIt.” was inspired by this conversation. It encourages our employees to live by the company’s core values and beliefs set forth by Newton Thomas. If we do, these values and the company will live on long after our founder is gone.

After decades of trailblazing, entrepreneur Newton Thomas makes his boldest move yet by planning on leaving his company to charity upon his passing to preserve the company’s values and beliefs in perpetuity.

In 2000 Newton Thomas attended Harvard Business School’s Executive Education Program to sharpen his management and leadership skills. Professors there found his company, The Newtron Group, to be extremely advanced in its commitment to employees and the social good. By then, companies like Ben & Jerry’s and Whole Foods Market had established a precedent for “conscious capitalism” by prioritizing charitable donations and shared management. The Newtron Group, it seemed to the Harvard educators, went even further by prioritizing its values and profit sharing with employees along with charitable giving.

Click on the Baton Rouge Business Report’s article or Core Values and Beliefs statement to read. 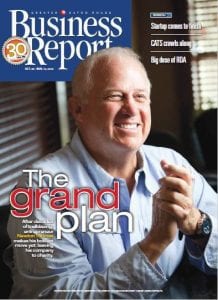 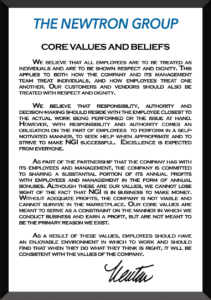 HISTORY OF THE NEWTRON GROUP COMPANIES

Excellence from the start

The Newtron Group is based in Baton Rouge, Louisiana, and owned by Newton B. Thomas. The company was founded by Thomas in 1973 as Newtron, a union industrial instrumentation contractor, to perform local and national projects but would quickly add electrical installation to its array of services.

In 1982, Triad Electric & Controls was founded in Baton Rouge, Louisiana to pursue industrial electrical and instrumentation merit shop work locally and nationally. In addition, Newtron would continue to operate as a union-only contractor and expand by opening its Nederland, Texas office. Nederland, Texas would become the operational headquarters for Newtron. The Newtron Group was founded during this time as the parent company for Newtron and Triad Electric & Controls.

The 1990’s brought continued growth for The Newtron Group with development of new companies to meet the needs of clients. In 1994, Triad Control Systems, based in Baton Rouge, Louisiana, was founded to provide design, fabrication and integration services for industrial junction boxes, panels, cabinets, buildings and analytical systems. Also, in 1994, Newtron Mechanical was founded in Nederland, Texas to provide mechanical installation services for select clients in and around Beaumont, Texas. In 1997, Newtron Heat Trace was founded in Nederland, Texas to provide heat trace design, equipment fabrication and installation locally and nationally. Also, in 1997, Com-Net Services was founded in Baton Rouge, Louisiana to provide data network and fiber optic installation services locally and nationally and Triad Electric & Controls expanded by opening an office in Lake Charles, Louisiana.

The Newtron Group entered the new century with the addition of local offices and expanded service offerings. Triad Electric & Controls further expanded by opening an office in Deer Park, Texas in 2005 and Newtron expanded in 2005 by opening an office in Martinez, California. Finally, in 2011, Newtron Electrical Services was founded to provide residential, commercial and light industrial installation and maintenance services.

In 2013, Triad Control Systems expanded its services by adding field analytical, automation and design services. In 2018, Com-Net Services merged with Triad Electric & Controls to provide expanded services throughout the company. Newtron expanded its operations again in 2019 by opening an office in Sparks, Nevada to perform work in and around the Reno-Tahoe area.

Page load link
We use cookies on our website to give you the most relevant experience by remembering your preferences and repeat visits. By clicking “Accept All”, you consent to the use of ALL the cookies. However, you may visit "Cookie Settings" to provide a controlled consent.
Cookie SettingsAccept All
Manage consent

This website uses cookies to improve your experience while you navigate through the website. Out of these, the cookies that are categorized as necessary are stored on your browser as they are essential for the working of basic functionalities of the website. We also use third-party cookies that help us analyze and understand how you use this website. These cookies will be stored in your browser only with your consent. You also have the option to opt-out of these cookies. But opting out of some of these cookies may affect your browsing experience.
Necessary Always Enabled
Necessary cookies are absolutely essential for the website to function properly. These cookies ensure basic functionalities and security features of the website, anonymously.
Functional
Functional cookies help to perform certain functionalities like sharing the content of the website on social media platforms, collect feedbacks, and other third-party features.
Performance
Performance cookies are used to understand and analyze the key performance indexes of the website which helps in delivering a better user experience for the visitors.
Analytics
Analytical cookies are used to understand how visitors interact with the website. These cookies help provide information on metrics the number of visitors, bounce rate, traffic source, etc.
Advertisement
Advertisement cookies are used to provide visitors with relevant ads and marketing campaigns. These cookies track visitors across websites and collect information to provide customized ads.
Others
Other uncategorized cookies are those that are being analyzed and have not been classified into a category as yet.
SAVE & ACCEPT
Go to Top